Exploring Green Bay with Pop in the Offseason

Is my old man a Green Bay Packers fan? Get out of here.If he cuts himself shaving, he’d bleed green and gold – and would call it a badge of honor.

He loves the Packers, crisp autumn Sundays, bitter cold December games when the team’s 12th man is the weather. But summers drag on for him. There’s no football. It’s especially true now that he’s retired after 35 years. He mopes around the house until Mom shoos him out to his workshop, where he mopes some more.

That’s why my brother and I decided to load him up for an off-season Green Bay Packers weekend, to sample all the great things to do there that we never get around to when we come to town for a game.

Oh, he snorted at the idea at first; he always does. But by the time we pulled into the Hotel Northland in downtown Green Bay he was definitely up for the experience.

“This looks just like something out of that movie with Robert Redford, ‘The Sting,’” Pop said as we crossed the spacious lobby filled with furnishings and features recapturing the era when the classic hotel first opened, 1924. But the recent renovation meant the hotel features all the modern amenities. The television greeted us by name when we reached our room, which included a broad view of downtown Green Bay.

The hotel is a stop on the Green Bay Packers Heritage Trail, as visiting teams often stayed there in its earlier heyday. They no doubt enjoyed steaks at the sumptuously woody Walnut Room, which still offers outstanding food, along with Poke the Bear, the hotel’s second restaurant.

We decided to stick to the Packers Heritage Trail for our first activity. Pop especially enjoyed seeing old City Stadium, where the Packers played before Lambeau Field, not to mention Curly Lambeau’s childhood home and the birthplace of the Packers.

All told there are 22 bronze plaques laying out the history of Green Bay and its love affair with the Packers. It’s spread over a three-mile walk, but there are also trolley tours for those who don’t want to hoof it.

“I’ll be fine,” Pop said, turning down the trolley. And he was; he even had an extra pep in his step. 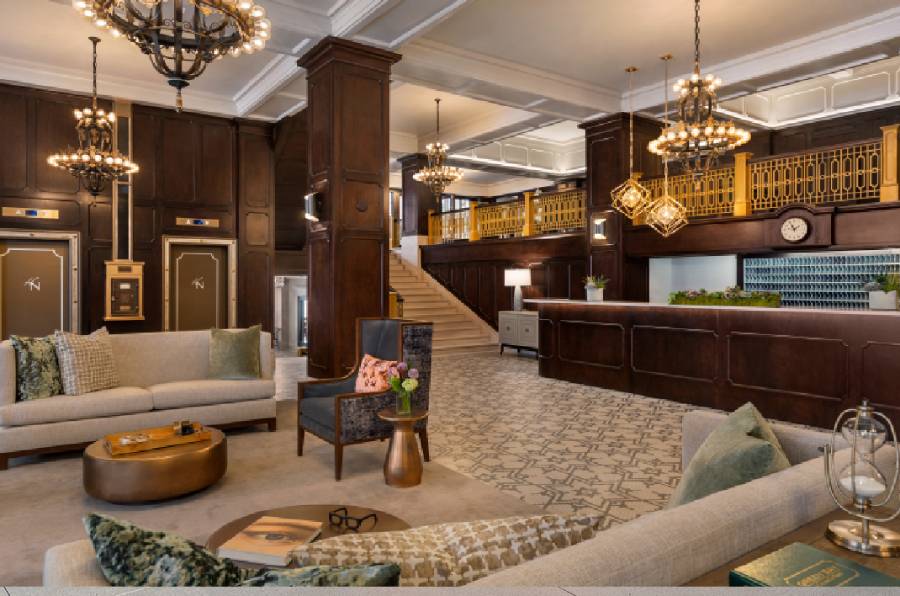 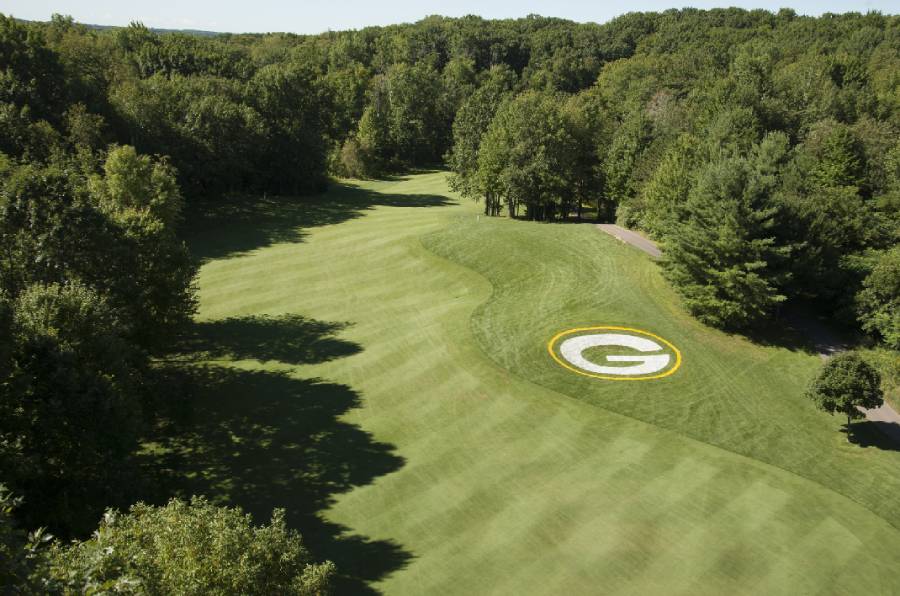 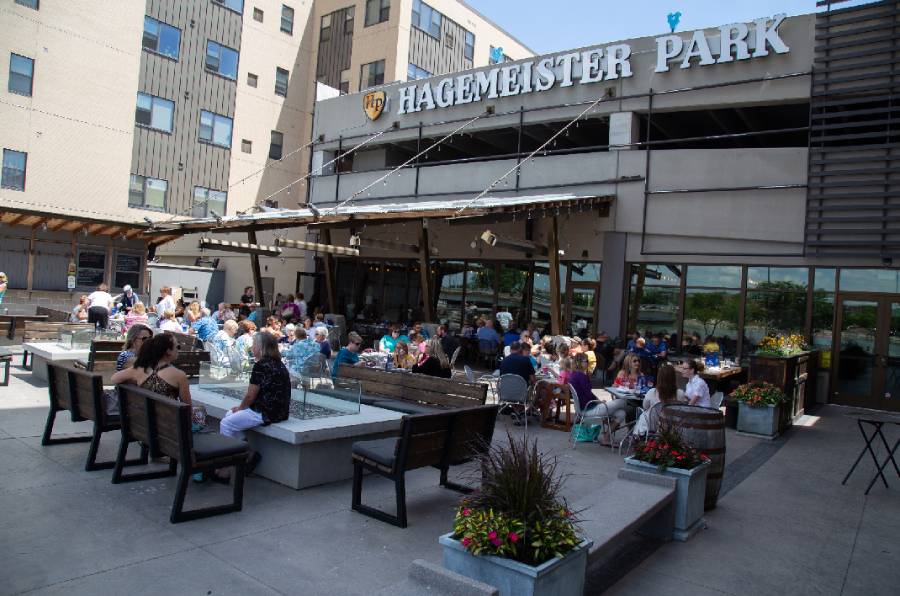 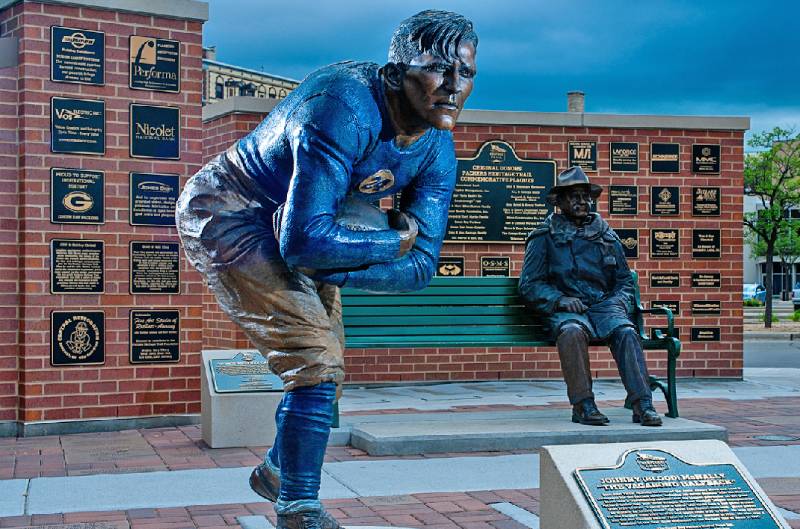 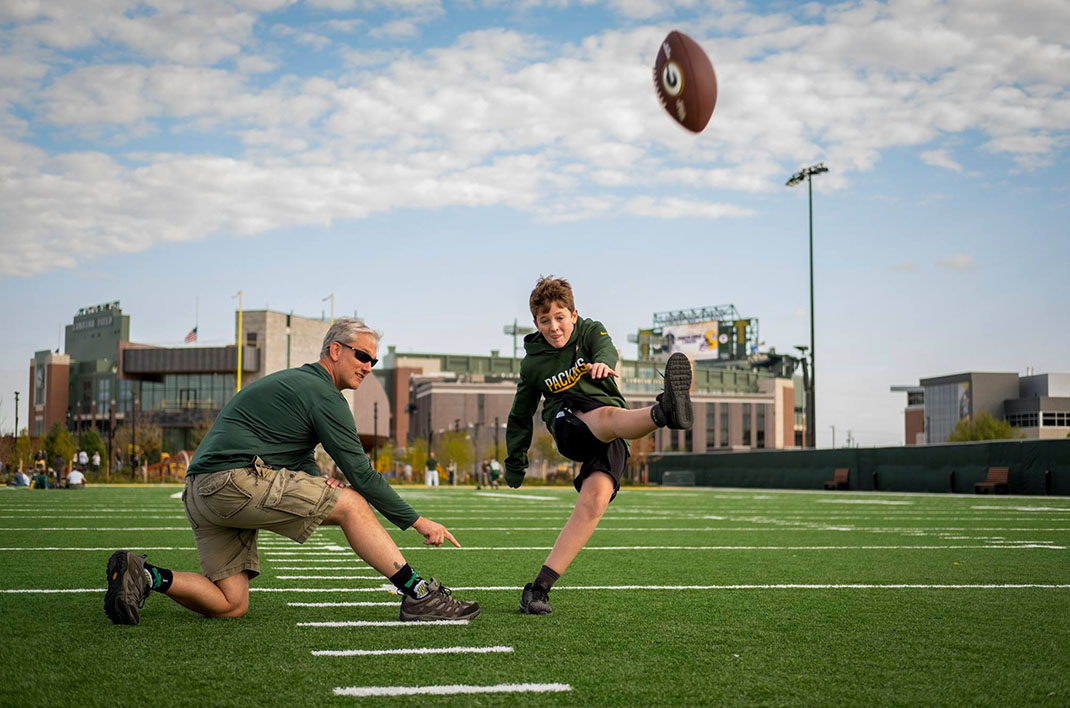 The outing built up a good thirst, which we took care of at Copper State Brewing Company, downtown on the banks of the Fox River. We settled into a picnic table in the rustic style dining area and went for the Truffle Burger for me, Bob had the Turkey-Melt-In-My-Mouth, and our dad said he was going for the Rugged North Burger.

He thought a minute, and then told Becky, our waitress, “Lemme try those Thai Brussels Sprouts, too.”

We looked at him.

“What?” he asked as if it was normal for him to explore the outer edges of  menus.

Then it came time to order our beers. We tried a few different samples and ordered pints of our favorites. Pop liked the Rugged North, a German Lager that went well with his burger. Bob raved about the Pomegranate Pucker Sour. OK. I went with my old reliable, an amber called Good N Ruddy.

Tee Time and Beyond

The next morning, we had a tee time at Thornberry Creek Golf Course at Oneida, which is known as the official course of The Packers. Maybe it’s the Green Bay Packers helmet G planted in the parklike landscape. Set in a “forested Northwoods” setting, the 27-hole championship course really captures the cool freshness of golf in the northern states.

For lunch, we went as far back in Packers history as you could go, eating at Hagemeister Park named after the spot the Pack played in their earliest years, 1919 to 1922. (They won their first game 53-0.) With an eclectic menu spanning traditional German dishes to more exotic fare like Bulleit Bourbon Street Salmon, dining on the restaurant’s patio was an amazing experience. Pop got a huge kick out of finishing out the afternoon with some tasting forays at Main Street Bourbon Room – a mellow venue that once rang with the shouts of partying college kids where adults can now properly savor adult beverages, as well as tasty gastropub style food. Next was Hinterland Brewery, with a Packers-fan irresistible address on Lombardi Avenue.

“I’m for the Packerland Pilsner,” Pop said, surprising exactly nobody. “Says it’s great with tailgating food, so we better order some” he said, picking up the menu. He chose the Applewood Smoked BBQ Pulled Pork.

“What, no Brussels sprouts?” Bob teased him.

“Yeah, yeah,” Pops smirked. No sooner did we get to our next stop, Stillmank Brewery, his first order was their Tequila Barrel Aged Killer Bees. We worked our way responsibly through flights including brews like Stillmank Perky Porter, Wisco Disco, Awesome Sauce American Ale, and even some Door County Cider, for balance.

From there it was off to our second night accommodations, at Lodge Kohler, a fun boutique hotel offering sophisticated atmosphere with a warm, Midwestern spark. There was plenty to like at the Lodge, probably led by its location just 100 yards from the Mecca of Packerdom, Lambeau Field itself.

Overlooking the stadium and broad Titletown Plaza, our rooms were as sumptuous as you’d expect from a part of the Kohler company. Looking down on the expanse of green and gold below us, we decided we had to cap off our Green Bay visit with a visit to the Green Bay Packers Hall of Fame.

It says volumes about the Packers’ impact on professional football that their hall of fame alone needs 15,000 square feet to showcase the team’s march through gridiron history.

Our dad, of course, was of the Bart Starr, Vince Lombardi, Paul Hornung era, but Bob and I gravitated to the more recent stars, Brett Favre, James Lofton, Dexter Williams, and of course Aaron Rodgers.

Strolling through the Hall of Fame was a peak experience for us, three lifelong Packers fans. Even Pop was impressed.

“This is how the world should be painted,” he said, “in Packers green and championship gold.”

But we couldn’t leave without paying our respects to the long-departed Packers who started the tradition. Men like Robert “Cal” Hubbard, a tackle who didn’t get around to joining the team until he was 29. Or a player with the perfect Green Bay Packers name: George Svendsen, a center.

Or Francis “Jug” Earp, laying down the law at center. He was born in 1897. Or Johnny “Blood” McNally, a running back who apparently either bled a lot or, more likely in that era of leather helmets and no faceguards, caused others to do so.

We worked up a powerful hunger, learning about the exploits and accomplishments of these larger than life men, especially from the earliest years.

So it was appropriate that our last stop was at Green Bay landmark Al’s Hamburgers, serving what is said to be “the best burger in Green Bay” since 1934. That’s 86 years, but who’s counting?

All three of us raved about our burgers. Pop had his Al’s Classic, with pickles and onions and some pepper jack cheese for the taste jolt. Bob went quirky, adding a fried egg to his. And I couldn’t resist ordering the Stroganoff Burger, ladled with fried onions, mushrooms, layered with Swiss cheese and dripping with sour cream.

Pop took one look at my double handful and predicted I wouldn’t be able to finish it.

“That’s alright,” he said. “Cause we’re definitely coming back to off-season Green Bay, and you can pick up where you left off.”